It always struck me as a little weird that every single person in the Star Trek universe seemed to keep a daily log. No matter what happened wherever everyone would always check the daily logs first. As if no one had anything better to do than record what they had done every day. And was it just the days activities? What about personal things? It always struck me as a little odd that people would be recording their personal issues on a daily basis that anyone could later go through in an investigation. Yet here I am, recording my daily activities for all to read. Or at least those who accidentally stumble upon these ramblings.

Obviously in the 60s and then the 90s and 00s, when Star Trek was particularly popular, blogs didn’t yet exist. Hell, the internet barely existed. So the idea that you would record something that anyone anywhere could just read whenever/if ever they felt like it may have seemed a bit more futuristic. But now it seems to be common place. I remember the early days of Livejournal and how many people I knew who would basically post public diary entries for the whole world to read. That always seemed a little off to me. Why would you want people to read that if it wasn’t a cry for attention? But then what is this if not a slightly more refined and subtle cry for attention? A simple response to a challenge?

Over this trip I started reading Bram Stoker’s “Dracula.” For those who have not read it, the book is arranged as a collection of journal entries, letters and memos. The initial four chapters are just entries into Jonathan Harker’s journal about his experiences with the Count. While it might seem strange to us now, having had countless hours of history lectures from Flower, a lot of what we know about history is from people who just bothered to sit down and write about what happened to them that day. And in a lot of cases it’s the mundane every day activities that are the most revealing to how people lived. What will historians an thousand years in the future think of the petabytes of data that we’re creating now? With every menial interaction recorded on a server somewhere, what kind of picture will that paint?

This morning I went over to the airfield with another guy and we managed to jump start an old skid steer with a brush attachment. I was going to try and sweep the ramp a little better. Unfortunately the machine had no doubt been sitting in that junk pile for a long time and had a lot of issues. For example, it had a lot of trouble doing two things at once, such as moving forward and turning. An essential combination when you’re trying to maneuver around aircraft. The other issue was that the brush was so worn it barely contacted the pavement. So pass after pass barely swept up any dirt. After it died on me several times I managed to limp it up against a wall out of the way, lest it die on me in the middle of the ramp an obstruct traffic. On a plus side though I did get to see some aircraft recovery. 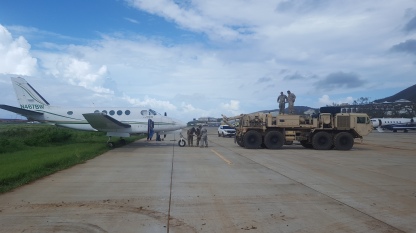 The rest of the day was pretty low key. I helped some guys fill in a combination sump/French drain and then spent some time cleaning out the tracks of our skid steer so I can take it over to the airfield tomorrow and hopefully get a better brush attachment and hopefully actually sweep up the ramp.