My mother will always remember our family trip to Arizona in ’96 for, among various other reasons, my reaction when we first walked out of the airport and I saw for the first time in my life a saguaro cactus.

“They are real…” my 13 year old mind exclaimed.

Of course I had seen them in cartoons, TV shows, pictures in books, but that was the first time I had ever seen one. That was only minutes into our trip, yet to this day she has said that single remark made the entire trip worth it.

I had a similar reaction when the bus rolled up to the in-processing building when I arrived at Lackland two years ago. I had seen countless movies and TV shows that take place in boot camp, gods knows how many Air Force posters and pamphlets. Yet seeing those campaign hats for the first time in person elicited a similar reaction.

“They are real…” my 32 year old mind exclaimed.

Unlike Arizona though, I would not say that single reaction made the trip worth it.

I’ve had no such reaction during my time here. Sure, there are MTIs, but I’ve seen them before. Additionally they’re not as involved as they were at Lackland. Here their main job is in the first few weeks. During that time they teach drill, dorm maintenance and other basic military etiquette. By now we really only see them around meal time as they watch and critique flights marching around.

I guess there’s not really much here to have that reaction to. I haven’t been in that long, but as far as a training environment goes, once you’ve seen it, you’ve seen it. The actual execution of said training is what differs from each school, and from each squadron. And a lot of those reactions are more along the lines of “Oh. So that’s how they’re going to do it.”

Week four was actually a rather good week. We started off Monday in another land nav exercise. We took a bus out to another camp and did some similar exercises to the ones we did around the campus before, only this time were out in the woods. It was a similar set up, each team member took turns on the lead. I did decently well. The actual leadership exercises are fairly good in that the vast majority of the instructors give honest and accurate feedback. Some grade harder than others, but overall, the feedback you’re getting in areas of improvement is helpful.

After the land nav we ran the assault course. That was a lot of fun. I’d actually like to do it again. It’s your standard military style obstacle course. There’s even a wall to climb over. It’s interesting in that each individual obstacle is not in of itself difficult, but while you’re running through the whole thing jumping over some things, crawling under others, it can get fairly exhausting. 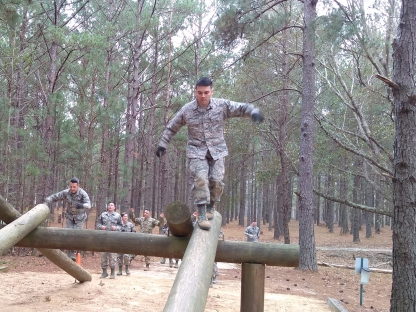 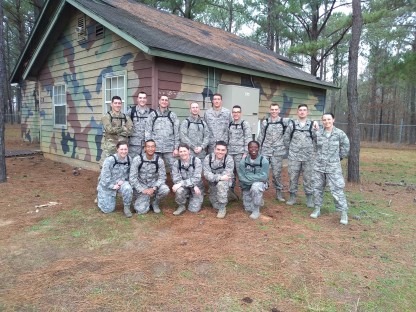 Tuesday was lower key in the morning. A couple briefings and then some classroom study time. In the afternoon we went out for a wargame exercise. Out on the drill pad they’ve set up a bunch of shipping containers as a mock village. This was another leadership exercise. Different groups were assigned different tasks, there was one headquarters and an objective to complete. I wasn’t being graded on this one so I actually didn’t do much of anything while we were there.

Wednesday was a good day. We started the morning at the Enlisted Heritage Hall. It’s a museum dedicated to the Air Force enlisted. It’s actually a good way for even the prior service to remember that the majority of the military is enlisted. It was also neat to see some of the more famous people who were once enlisted. Did you know Bob Ross was? And that he developed his quick painting technique while he was in? And that the reason he was so soft spoken was that he promised himself that he would never raise his voice again when he got out? Yeah, neither did I.

In the afternoon we went out and did some volunteer work at the Mercy House. It’s a nonprofit that set up a house, food pantry and soup kitchen for the homeless in the area to get a hot shower and food. There was a fence that needed building and a house that needed demolishing. So we spent a couple hours there working on that. The people in charge of our community service are trying to see if we can carve out some more time to go back and finish the work. 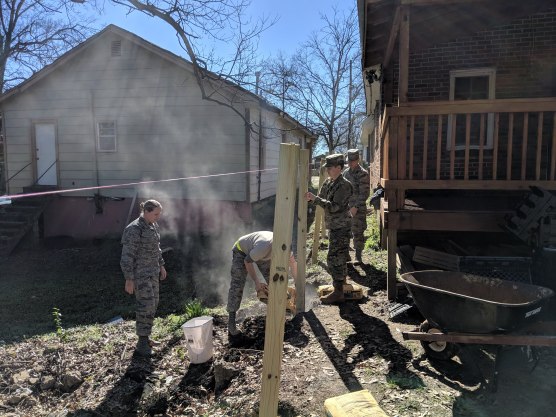 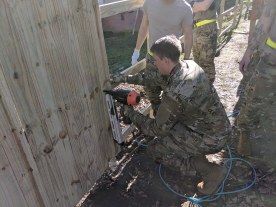 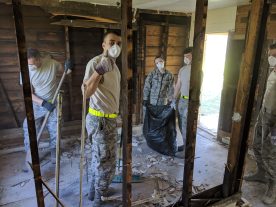 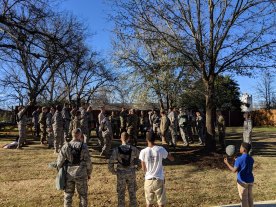 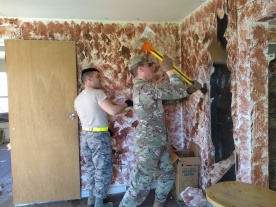 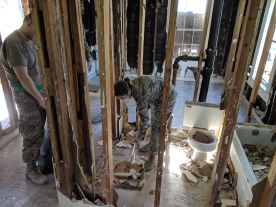 Thursday was fairly busy as well. In the morning we had another wargame exercise at the mock village. This time I was being graded and did well. I would have done better, but there was an…ahem…friendly fire incident on the part of the people who were supposed to be coming to get us. That threw me a little off and caused me to forget a couple of our directives. Though I recovered well.

In the afternoon we had yet another wargame exercise, though this one was on computers. We had groups of two and a central commander and had to coordinate an air mission. It was interesting, though I don’t think we really had enough time to actually get used to the software. We had a practice run last weekend, but I don’t really think it was enough. Additionally the software seems to have been updated, but the documentation wasn’t, so there was some confusion as to which groups had which planes and what some of them did.

Friday was everyone’s favorite day. We went out to the range and learned the anatomy of a pew. As we’re officer trainees they had us qualifying on the M9 pistol. Generally that’s what officers qual on. Though being CE, and RED HORSE in particular, I’ll do M4 as well. Sadly my days of M240 seem to be over. I might still get assigned on a heavy weapons team, but I sure as heck won’t be the gunner. Ah well, it was fun while it lasted. Anyway, shooting went well. Our group actually had more people shoot expert than they’ve seen before. Unfortunately I was not one of them. I was close. I qualified, but I’ll have to wait until next time to try expert again. Guess I’ll need to practice more. 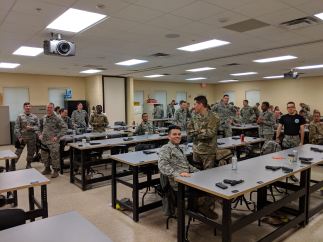 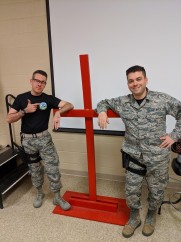 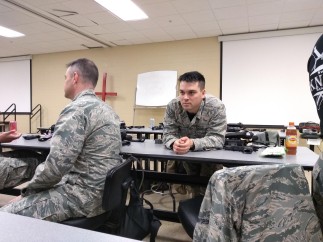 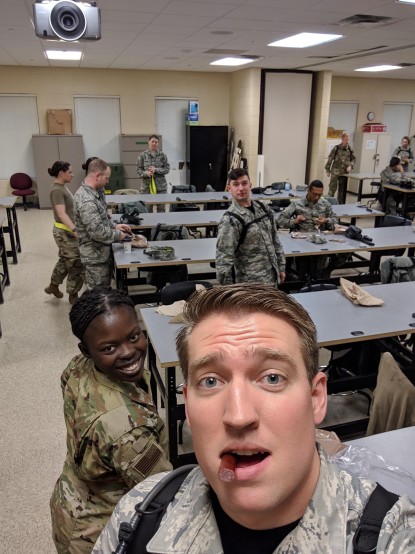 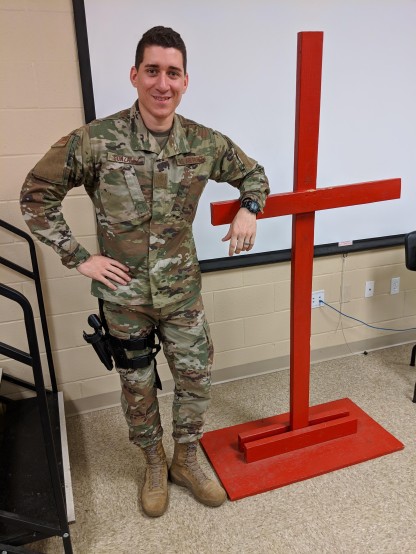 At the end of the day we had our weekly change of command ceremony, where we get new student leadership. Additionally the LtCol gave us the next privilege phase. We are now allowed access to the base on weekends and no longer have to eat at the DFAC for dinner on weekends. I ate entirely too much pizza last night. I stepped on a scale today…I will need to eat less pizza in the future. Though we did have a mock PT test today as a flight and I passed easily. So I guess I still have that going for me.

We’re in the midst of a three day weekend now. Which is something we would never have had in basic, and still kind of tweeks me out a bit. I spent most of yesterday in bed watching TV on my computer. Which is also something I would never have done in basic. But I guess it’s a different world now. Tomorrow I think we might be going out to help set up for an exercise we’re doing Tuesday. But other than that, another day ‘off.’

Stay tuned next week for another exciting episode of “Tales from the Inside: The Journeys End.”